Song of the Dead: Our Doom and Our Pride

Song of the Dead in the South – in the sun by their skeleton horses,
Where the warrigal whimpers and bays through the dust
of the sere river-courses.

We Must Feed Our Sea, the first part of Song of the Dead, is at an end; here begins the second part, Our Doom and Our Pride. At such a time I customarily have a look at the geostrategic situation, with a particularly sharp eye out for who is exposing a kidney and can be usefully attacked.

Here then is the map of Europe in this year that the Christians call 1444: 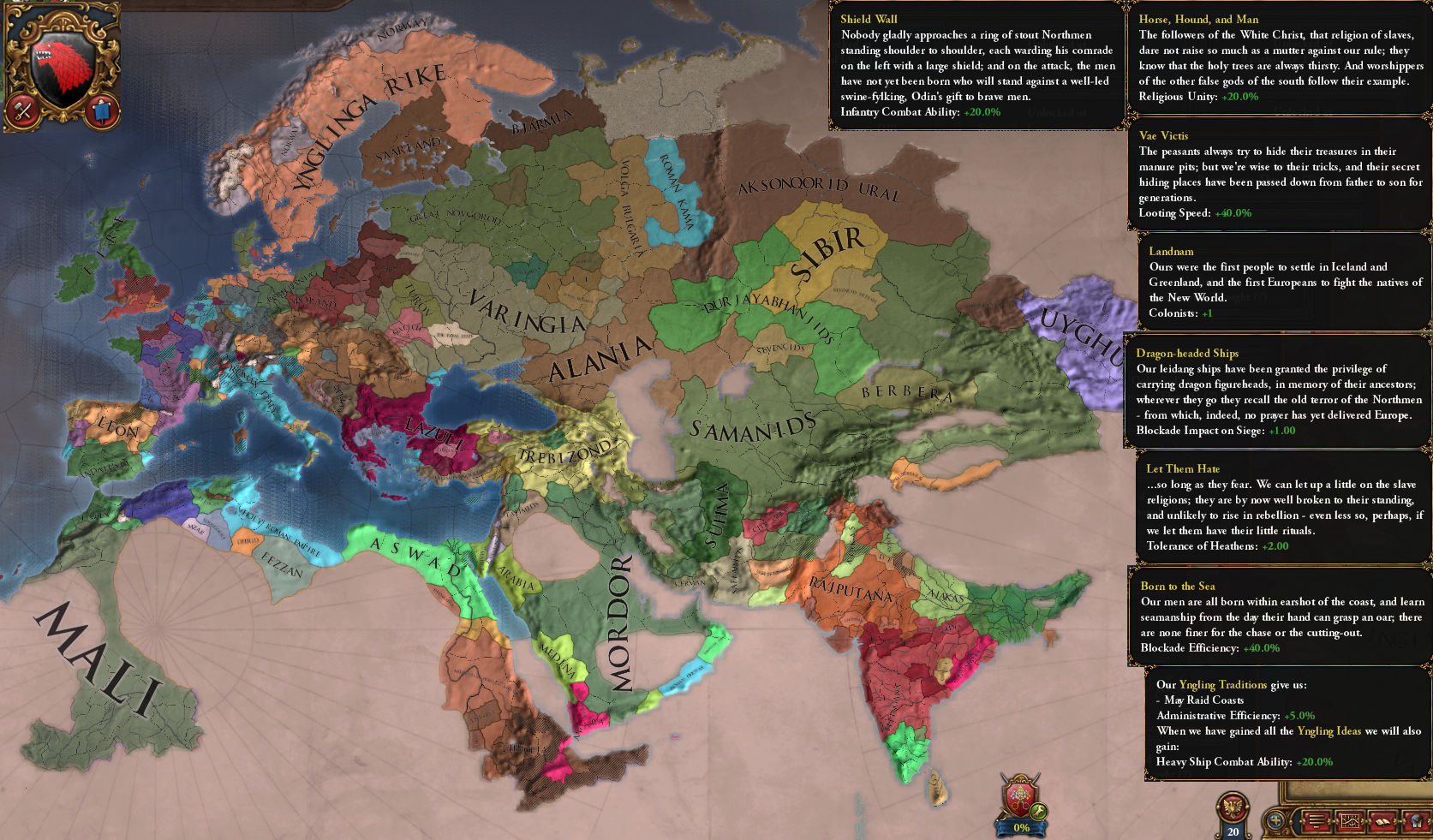 Note the splendid wolf’s-head banner of the Ynglings, courtesy of Blayne, “The Professor” on these forums, who played Lazuli in CK but has now moved to China. “Sable a wolf’s head gules”, a blazon to strike fear anywhere within a day’s ride of the high-tide mark; “a wolf’s head” is also an expression meaning an outlaw, an enemy of all mankind, who may be slain without paying any were-gild and who in consequence kills and robs for his living. It is a suitable banner for the Ynglings, and for the only surviving Norse power in Christian Europe; in the high north we have nothing but contempt for the religion of slaves.

Limiting the map to player realms: 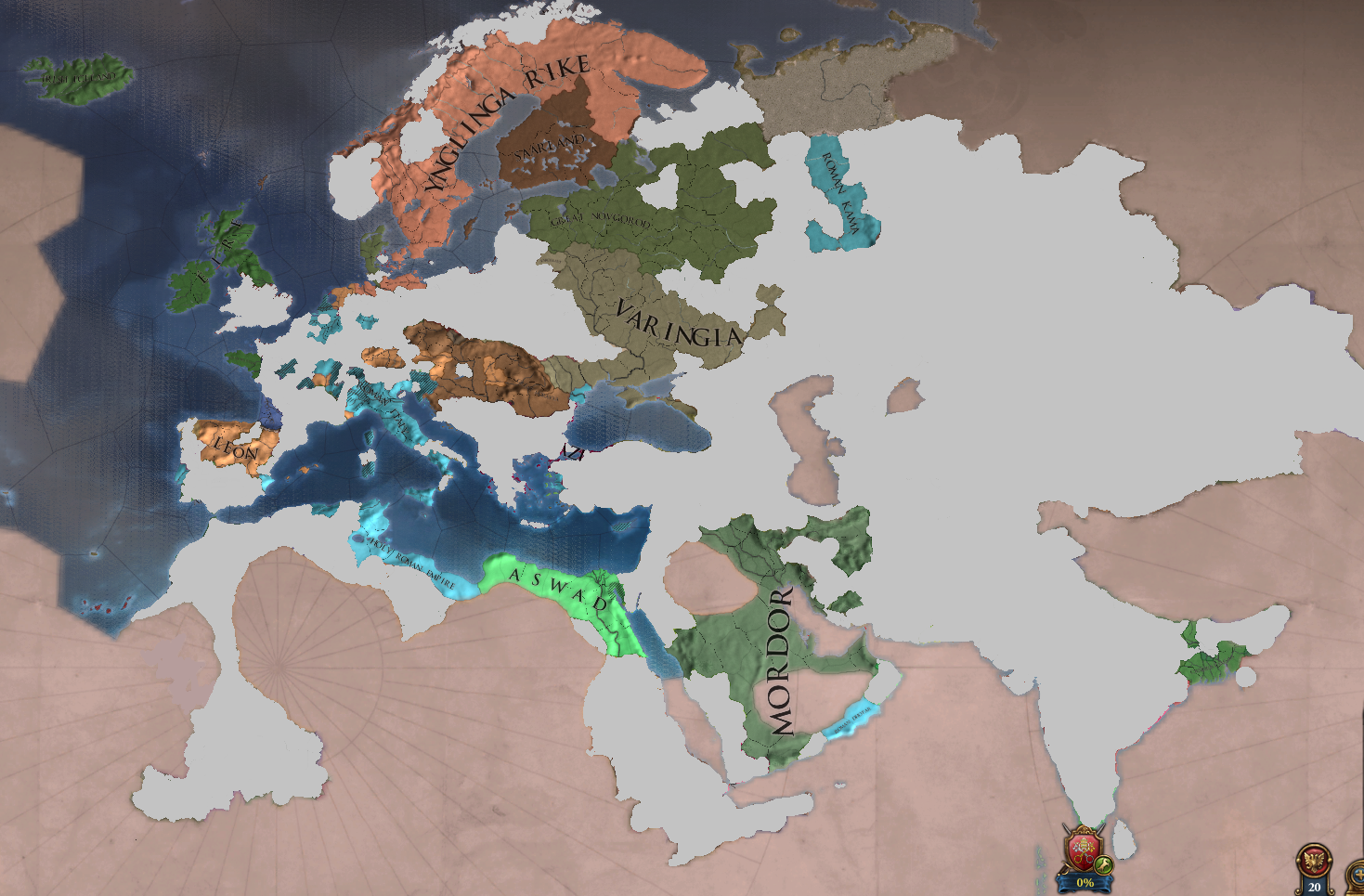 In addition we have two players in China, plus Kongo, Mongolia, Korea, and Japan; but they fall outside the saga for the present. There is, incidentally, room for more over in Asia, and if the large AI realms (Mali, Rajputana, Samanids, Telingana, Lazuli) survive, we will open them to players in 1550. I’ve left out Varingia’s personal union with Alania; Great Moravia (about where Austria-Hungary was in OTL) has a personal union with Serbia. Finally, the AI powers in western Europe have been put into the Empire:

This is intended to give them a little more defensive power against the rapacious humans surrounding them. Observe that Europe is not fully divided between the players, and that the largest player realms are roughly equal; that’s because we had a realm-size limit in Crusader Kings, which more or less accomplished its purpose of preventing runaway blobbing and one player or alliance bloc becoming dominant in the first part of the game.

I am playing the Ynglinga Rike, a Dutch Republic following the Norse faith and dominating most of Scandinavia. The first map is decorated with my custom ideas, known as the Viking; it is a fierce and aggressive set, suited for sea warfare and landing the long ships on enemy coasts to raid and pillage. My first act was to burn the Christian coasts from the Gulf of Finland to the mouth of the Thames; it’s true that this annoyed some of the other players, but I needed the money for mercenaries to fight off the people I’d annoyed. Immediately to my east is my ally the Peasant Republic of Saarland, with the somewhat similar Pirate ideas. East of them again is Great Novgorod, playing the Banker set and warily watching the Noble Republic of Varingia to their south, while preparing to expand east into the steppe. Novgorod is played by Gollevainen, a veteran of these megacampaigns; Varingia by Dragoon, the vice-GM and perhaps our strongest Crusader Kings player. He has got the immensely strong Artilleryman set, which will make him a land power to be feared once artillery becomes powerful. The idea sets were assigned by an auction, using achievement points acquired in Crusader Kings; Dragoon, with the highest score, had his choice of which to take and used them like a scalpel; hence the personal union with Alania and the French Musketeers splendor bonus, both of which were also auction benefits.

Moving west from Varingia we come to Great Moravia, with the Mongol ideas giving them very powerful cavalry – almost the opposite of Varingia, this makes them a powerful land power in the early years when cavalry dominates, but weaker later on. Moravia is also unfortunate in being squeezed between Varingia and the Holy Roman Empire, with the Samurai set encouraging them to be at war at all times. This ‘Holy Roman Empire’ is neither holy, Roman, imperial, or ingame; it is only the localisation text Mark chose for his nation. Indeed this alleged Empire is in fact an Ambrosian Republic. We also have the actual ingame HRE, which is AI. But whether accurately named or not, the Holy Republican Empire is the largest human power, and it seems likely that it will be necessary to resist its encroaching on High Germany. The Germans are the lawful prey of the Ynglings, and have been so from the first Great-Game timeline.

West again we find Leon, the second-ranked nation in CK, with the Globalist ideas making it a strong coloniser. It was apparently much damaged by the disastrous invasion of Sweden in CK, for Andalusia to its south – an AI nation, no less! – gave it a good and well-deserved kicking in the first session. Tiny Poitou in the southwest of France is played by Zirotron with the Colonizer ideas; although he was not very successful at Crusader Kings, in fact the only player who never became a kingdom, Leon’s troubles may be his opportunity – presumably they will both compete for American colonies. North of that, the British Isles are dominated by Eire, whose Guardsman ideas will give it excellent infantry in a few years. Eire is a Polish Monarchy, and has already taken over much of what is England in this 1444 map. They will be a major rival when the Scandinavian republics try to colonise our rightful clay across the Atlantic.

Finally we have two surviving Muslim powers, Aswad and Mordor, with Crusader (yes, irony!) and Merchant ideas respectively. Mordor of the burning-eye flag rejoices in the Ottoman form of government; isolated in the southeast part of the map, it interacted very little with any other player realm in Crusader Kings, but that will presumably change now.

These are the people who played the two hundred years of Crusader Kings (excepting Blayne of the Lazuli, who as noted moved to China). In addition Khan is playing Candravamsa over in India, with Mercenary ideas and the Prussian government form. We split Ming into its component warlords, and have two players there, Blayne playing Tianlan (renamed from Wu) with the Philosopher King ideas, and Hooonter playing Xi, so far without a custom idea set. Vaniver, eliminated early in CK (he was playing a Muslim nation in Andalusia) is returning is Korea with the Scholar idea set. The immensely skilled Ragatokk is joining us as Uesugi, again without custom ideas so far, and is well on his way to uniting Japan. Kuipy, well known for his plots spanning centuries, has taken Kongo, slightly buffed by edits; and finally we have FailedStrategy in Mongolia.

I began at war with no less than three player realms, namely Eire, Leon, and Varingia; although allied to Saarland in this Second Baltic Crusade, my situation would be quite bad if those players had intended to press home their attack. Fortunately the gods are with me; in Crusader Kings they sent the Great Plague which, in combination with the snow and the mountains – it is never a joke to fight in Norway in winter, and all the less so for the plague – melted away the Leonese armies that invaded Sweden. Having failed of their purpose in that game, the Crusaders (prompted no doubt by the real gods whispering in their ears, perhaps when they thought themselves closest in prayer to the false White Christ) appear to have simply given up; all three player realms offered me peace without concessions within a year of the game start, leaving me to snap up their minor AI allies as vassals.

I was, unfortunately, somewhat less successful in the First Baltic Crusade back in CK, which is why Norway to my west is currently an independent nation; I was unable to complete the reconquest in CK, but as long as no player protects it, it doesn’t look too difficult here. However, the project will have to wait until my current war is over; the multiple vassalisations seem to have made the AI nervous, for Germany, France, and Alsace formed a coalition against me. Between them they have about three times my army; fortunately they marched three-fourths of it into Fyn, where my superior fleet is keeping it bottled up while I conquer their homelands. Their defense now consists mainly of the rebels infesting their homelands. Unhappily a large rebel stack surprised my army as I was besieging Paris, which is why I’m out of manpower as the second session begins.

Finally, here is the map of Europe at the end of the first session: 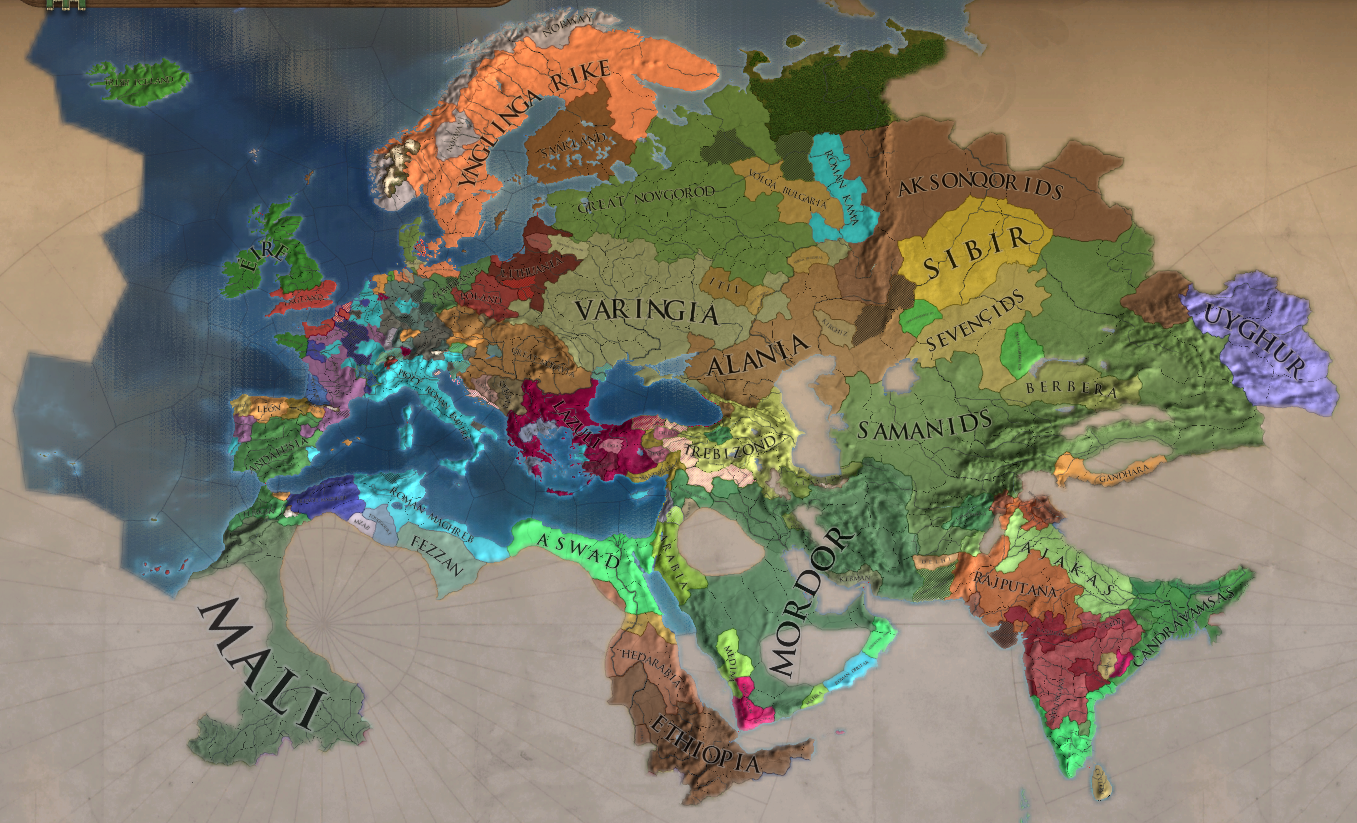 Note the smoothing out of Varingia, the HRE, and Novgorod; Eire expanding into England; the drastic reduction of Leon; and Candravamsas absorbing the neighboring minors.

Filed under Our Doom and Our Pride, Song of the Dead

Tagged as EU4, Gameplay, Song of the Dead