Our Doom and Our Pride: Old Gray Widow-Maker

In accordance with custom older than the Crown Princess of Men, in fact older even than the founding of the of-Men dynasty by my marriage to the Queen of Men, I will mark the transition from CK2 to EU4 with an overview of the geopolitical situation; for this first session I’ll concentrate on the players in northern Europe. Here is the situation in 1444: 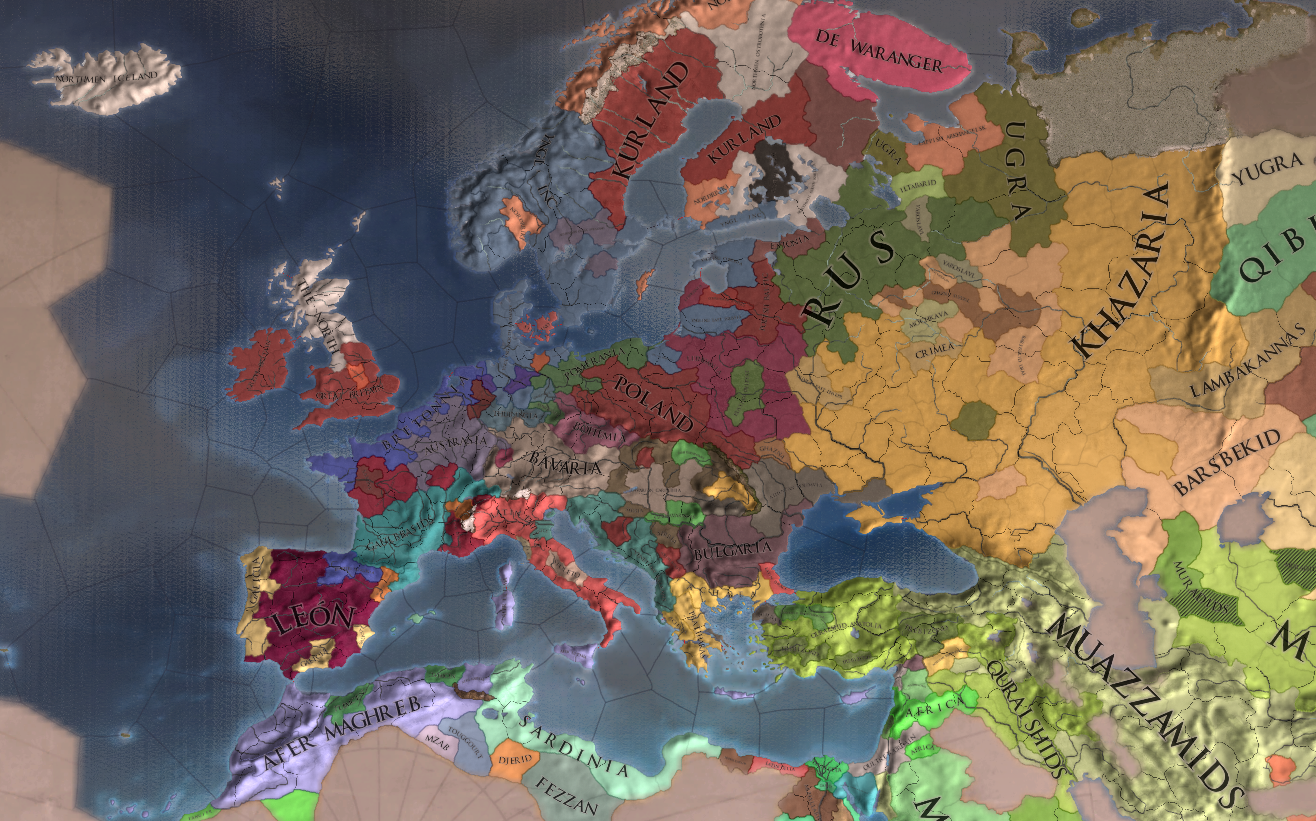 with four players surrounding the North Sea, namely my Scandinavia (also known as Yngl, Inc); Scotland (or “The North”) played by Zirotron; England played by Gollevainen; and Bretonnia, the French-blue strip along the Channel, which in CK was played by Vaniver but has been taken over by djones for EU4. Also relevant to northern politics are the aggressive Bavarian Peasant Republic, played by Hoonter; the vast yellow blob of Khazaria, played by Clonefusion; and tiny Bohemia, played by Yami-Yagari. Bohemia is about half the size it needed to be, because Yami, in a surfeit of perhaps-misguided altruism, decided to split off his Lithuanian duchies so as to encourage anyone considering taking an Eastern-European slot. It’s true that eastern Europe might have needed the help – I think Bohemia still converted with more development than Khazaria, which was overrun by nomads in CK2 and is essentially a wasteland – but in light of the largish Bavaria right next to him, splitting Bohemia, which wasn’t even near the realm-size limit, in half seems a bit surplus to requirements.

Before going into the alliance politics and expansion goals, I have to explain our customisation system for the conversion. To play with historical national ideas would be a bit silly in this completely alternate history; the ones from the converter mod are OK but uninspired; and if everyone builds custom idea sets with X points, then everyone has to spend as many of those points as they possibly can on discipline and combat power, and we end up with ten identical builds. Our solution is to create a number of reasonably balanced national idea sets which are not Space Marines, and then auction them off; since the idea creators don’t know what set they’ll end up with, they have some incentive to make them all fairly good without just going for twenty bonus discipline every time. The points for the auction are acquired by spreading your dynasty in CK2, points being given for every day a dynasty member holds a title, and more points for higher tiers; then there are bonus points for achievements such as winning a Crusade or reforming your faith, and for dynasty members having interesting (not necessarily good) traits like Sea King and Kinslayer. Any points not used in the auction are converted to mana; the median player gets 1000 points, while the highest-scoring player (Vaniver) had 2800 or so. In addition to our custom idea sets, we auctioned off tag-specific Splendor bonuses, unusual governments, and the Holy Roman Empire; the three highest-bidding players had their entire dynasties entered into the HRE, and we ended up with the Empire spreading from Portugal to the Baltic, thus: 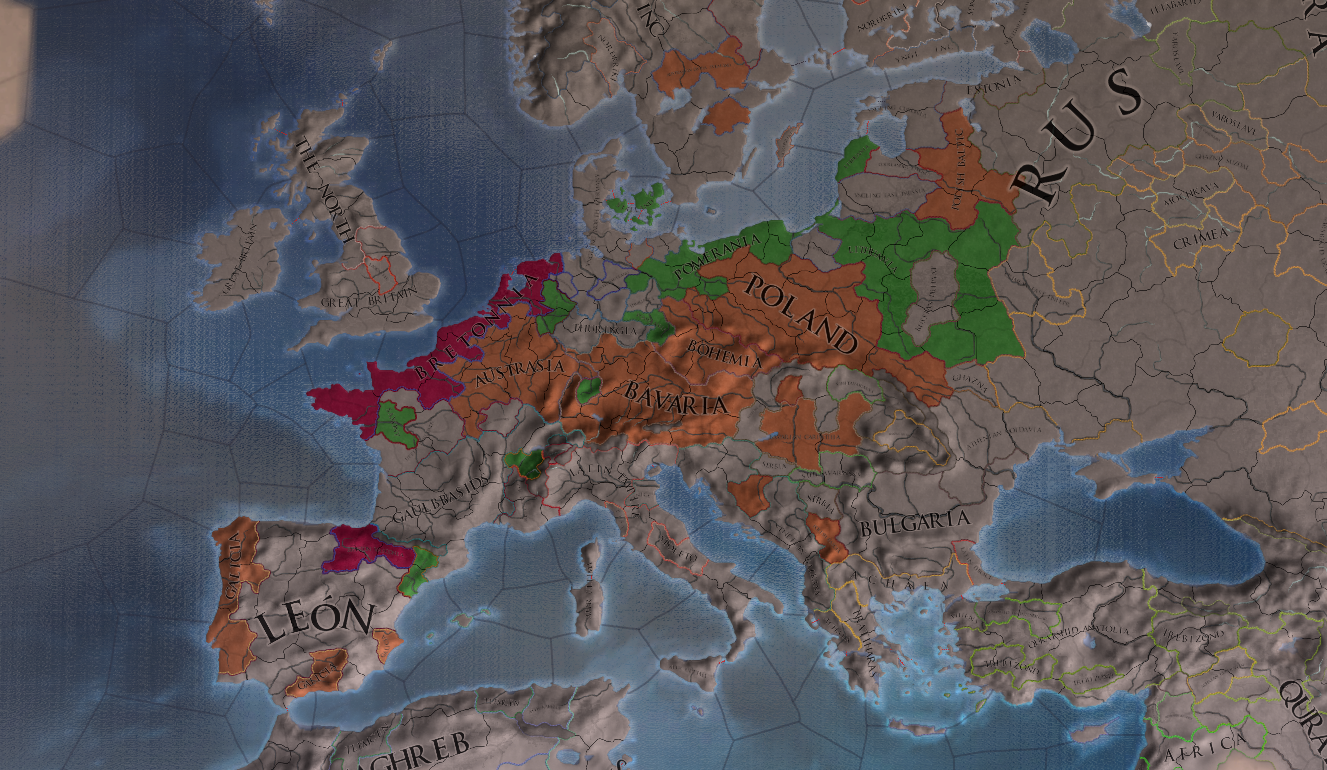 Clearly this is an important factor in the northern balance of power, at least if the player emperors play correctly. For most of the first session Bohemia was emperor, but so far has proved quite unable to defend the imperial borders.

With these notes in mind, here are the players surrounding the Old Gray Widow-Maker, the waters of the North Sea and the Baltic:

In the first session, people were naturally focused on consolidating a power base, absorbing the nearby AIs that had been protected in CK by the realm-size rule. The main events in Scandinavia: 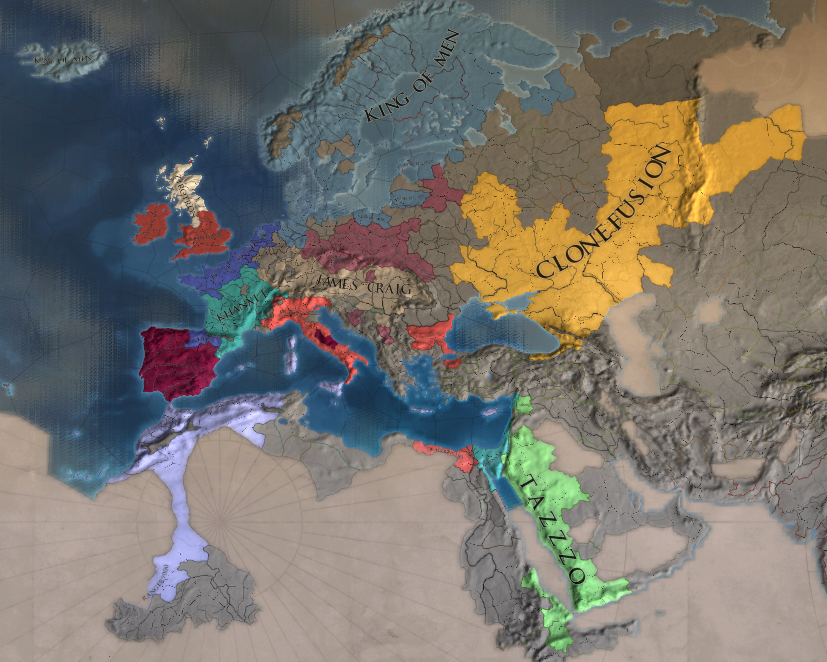 Players, 1470. Note Spain fully in control of its peninsula, Clone spreading across Russia, Tazzzo uniting the Arabs into a world-conquering force.

Filed under Our Doom and Our Pride, Song of the Dead

Tagged as EU4, Gameplay, Our Doom and Our Pride