The project of the North Sea Empire – a century in the making; a decade in the planning; a year in the execution – has failed. The savage Irish gallowglasses charged up the mound at Largs, and the shield-wall broke; the Teuton fleet escaped its confinement in the Elbe and seized the Sound. The French, too confident in the power of elan to carry all before them, retreat in disorder from the Rhine; the Russians, cautiously unwilling to push their pikes home, have yet to cross the Vistula. Everywhere the Central Powers triumph.

Even now, the Yngling Realm is not without resource; only men and treasure, not territory, has been lost. Three dozen ships, twenty thousand men, might yet control the North Sea; might raid and harry Ireland, as so many times before; might trouble the Teutons in the Danish isles, or shore up the shattered French army in its retreat towards Paris. But without victory on the ground in Scotland, there can be no seizure of its west coast, for which the Ynglings went to war. And Ireland has been well and truly warned of the Ynglings’ intent; Scotland swarms with swaggering gallowglasses, every town turned into a fortress, every village a barracks. While the Irish hold Scotland, the object of the dispute, there can be no victory; and with the defeat of the Army of the Isles, the conquest of Scotland has passed beyond practicality.

And the Ynglings, as ever, are nothing if not practical. They threw the dice, and the dice came up snake-eyes. Very well; a corsair is necessarily prepared for rapid reversals of fortune, and to turn them to account. The Ynglings have cut their losses; have negotiated a peace without cessions, and abandoned the ambition to rule Scotland’s coasts and, therewith, the North Sea unchallenged. It was a perilous project, reliant on victory in the field and fragile alliances; it has failed; there is no more to be said. Let the North Sea Empire fade into the ashes of history, to be replaced with the North Sea Confederation – not an empire built by conquest, but an alliance of countries that have tested each others’ mettle, and found they do not want to fight.

That is not to say, of course, that the Ynglings have given up on their urge to conquest and loot. They may be persuaded that particular wars are too dangerous, that specific strongholds are too well supplied and garrisoned. They will never admit the futility of force in general; sooner will they choke on radioactive German mud, sooner will they send their own children across the Jotunheim on skis, than abandon their war with all the world, to bring it under Yngling dominion or down in flames. They have made a peace with the Irish and their Teuton allies; but they have not agreed to stop using their ports as corsair bases, or for their trading ships to cease turning pirate when occasion offers. They are still the ‘Troll Republic’, a polity whose policy at sea has always been one of cheerful amorality; “the goods to the strong” is their motto, and “there is no peace out of sight of land”. If they no longer put dragon heads on the prows of their ships, it is not for lack of Viking spirit; it is because sailing ships’ prows are not as convenient for that use as longboats’, and they have never been ones to put obstacles of work or ritual in the way of making war.

It is, in any case, much more convenient to raise a banner, than to struggle with heavy carved wood; but in respect for tradition, the Ynglings have chosen for their emblem an image of those old dragon-heads, a snarling beast in red, suitable for striking terror in the hearts of fishing villages and wealthy monasteries. And if, in heraldic custom, it is also described as a “wolf’s head”, an old phrase for men beyond the protection or the reach of the law… well, Ynglings are not above appreciating irony. Scotland is safe, for now; but let the world’s oceans shiver at the sight of the banner of the Troll Republic. 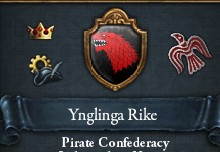 In Crusader Kings I at one point ruled all of Scotland; for the last century or so I kept losing bits and bobs of the place, until at least only the Isles and the East March remained at conversion. Hoping to gain full trade control of the North Sea COT, I attacked Ireland with my ally the Commonwealth, while Gaul started a separate war against Ireland’s ally the Teutonic Empire. Alas, it did not go well; although I was initially victorious at sea, my army that crossed into Scotland was hammered to flinders by an excellent Irish general, in spite of defending hills and having superior numbers. My French ally was overwhelmed in the Rhine fighting, the Commonwealth is not yet in a position to mobilise its full war potential, and then I made mistakes with my navy at a time when precision was called for, and the Teutons were able to defeat a part of it in detail.

The Scottish front, such as it is, with the overall war situation. There is no chance of me forcing a landing against that opposition, and if I move my navy the 15 Irish heavies hiding in Donegal will spring into action.

German front. My Commonwealth allies pushing very slowly into fortified Poland. Half my navy about to sink, exposing my siege of the Danish islands to Teuton vengeance.

In view of these developments, I have negotiated a white peace with Mike and Dragoon (Ireland and the Teutons), and we have reached an accommodation regarding America, in which I cede Scotland in exchange for concessions in colonial territory. We have given this detente the name of the “North Sea Confederacy”, replacing my ambition to rule the whole North Sea trade node and thus become the North Sea Empire. It remains to be seen whether our arrangement will be enforceable against the opposition of other players, but at any rate the Troll Republic is turning its eyes outwards.

I absolutely intend to keep privateering the Irish Sea and the Sound, however. There’s no peace out of sight of land.

Filed under Bloody yet Unbowed, Invictus